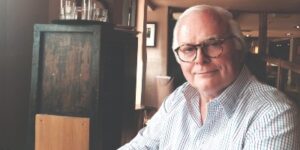 Stuart Woods, # 1 New York Times-bestselling author of more than ninety novels, including more than 75 books featuring his larger-than-life detective-turned-lawyer-investigator Stone Barrington, died peacefully in his sleep at his Connecticut home on Friday, July 22. He was 84.

He had an outsized personality, craved adventure, and gloried in the thrill of life. He spent time each year at his additional homes in Santa Fe, Key West, and Mount Desert Island, Maine.

His 1981 fiction debut Chiefs, a classic American mystery saga about three generations of lawmen tangled in a web of passion, secrets, destiny, and murder in their small Southern town, established Woods as a novelist. He has since been prolific, having published over ninety novels and writing five books a year for G.P. Putnam’s Sons.  His memoir, An Extravagant Life, was published in June 2022.  Putnam will publish Black Dog, the 62nd book in Stone Barrington series on August 2 and Distant Thunder, the 63rd book in the series on October 11, 2022.

“Stuart’s support of young writers was legendary,” said Douglas Preston, president of the Authors Guild. “Over thirty years ago, when I was an unknown writer with one modest book to my credit, Stuart took me under his wing, helped me find an agent, and was incredibly generous with advice and encouragement. He later dragged me, somewhat unwillingly, onto the board of the Authors Guild, which also transformed my life. He was a huge presence in the book world. We will deeply miss him.”

“Stuart was a dear friend, and one of the most generous people you’d ever hope to meet,” said Nick Taylor, Woods’s long-time friend and past president of the Authors Guild. “He lived life on his own terms, and what a life! He loved the Authors Guild because the Guild helped him when he was working to finish his first novel. The money from the fund for struggling authors allowed him to keep his house. That novel was Chiefs, and the rest is history. His friends and readers will miss him enormously.”

Born and raised in Georgia, Woods graduated from the University of Georgia with a BA in sociology before moving to New York in 1960 to pursue a career as a journalist. When he failed to land a job with a newspaper or magazine, he took a position in advertising. He worked for a New York advertising agency for a decade (with the exception of 10 months when he served in the Air National Guard), before relocating to London for three years to work for a British ad agency.

In 1973, he moved to Galway, Ireland, where it was cheaper to live. He worked part-time and began to write his first novel. “I was about a hundred pages into the book when I discovered sailing,” Woods wrote on his website. “Everything went to hell. All I did was sail.”

In 1976, he decided to compete in the Observer Single-handed Trans-Atlantic Race (OSTAR), which began in Plymouth, England, and ended in Newport, Rhode Island. He completed the race in 45 days, finishing somewhere in the middle, but knowing that his life had been permanently altered.

After the race, Woods returned to his native Georgia, where he wrote his first book—Blue Water, Green Skipper—a nonfiction account of his OSTAR experience. When W.W. Norton & Company acquired the American rights to the book, it also agreed to publish Woods’s novel based on its first 200 pages. In March 1981, eight years after Woods began it, his novel was released. Chiefs is a 1920s-set mystery thriller about a failed cotton farmer who has just been named police chief in a small Georgia town where he must solve the ritual beating and murder of a teenager.

Though Chiefs had a limited run, it gained popularity when released in paperback and CBS subsequently turned it into a six-hour television movie starring Charlton Heston, Danny Glover, and Billy Dee Williams. Chiefs also won the Edgar Allen Poe Award from the Mystery Writers of America.

Despite writing two or more novels each year, Stuart continued to sail throughout his career, including skippering a yacht across the Atlantic with a crew of six, calling at the Azores, Madeira, the Canary Islands, and finishing at Antigua in the Caribbean. Woods was also a licensed, instrument-rated private pilot who flew regularly around the country on his many book tours, where he loved meeting his readers.

He is survived by his wife, the former Jeanmarie Cooper of Key West. He was a licensed, instrument-rated private pilot and, Jeanmarie, who earned her private pilot, instrument and multi-engine ratings, was his co-pilot. They lived in Florida, Maine, and Connecticut.