J. Courtney Sullivan and Connie Shultz to Discuss Their New Books via Zoom (7/8) 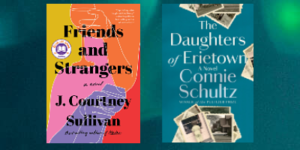 J. Courtney Sullivan, author of FRIENDS AND STRANGERS (Knopf), will be in conversation with Connie Shultz, author of THE DAUGHTERS OF ERIETOWN (Random House) at a virtual event hosted by Politics & Prose Bookstore (Washington, DC) virtual event via Zoom on Wednesday, July 8, at 6:00pm (ET).

Sullivan’s FRIENDS AND STRANGERS is an insightful, hilarious, and compulsively readable novel about a complicated friendship between two women who are at two very different stages in life, from the bestselling author of Maine and Saints for All Occasions (named one of the Washington Post‘s Ten Best Books of the Year and a New York Times Critics’ Pick).

Shultz’s THE DAUGHTERS OF ERIETOWN is the powerful first novel by the Pulitzer Prize–winning journalist. The evolution of women’s lives spanning the second half of the twentieth century is at the center of the narrative that richly portrays how much people know—and pretend not to know—about the secrets at the heart of a town, and a family.