Jeffrey Toobin In Conversation with Scott Turow via Zoom (8/4) 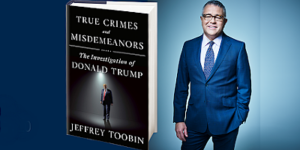 Jeffrey Toobin, whose new book is TRUE CRIMES AND MISDEMEANORS (Doubleday), will be in conversation with Scott Turow on a virtual edition of Writers Bloc via Zoom on Tuesday, August 4 at 7:00 pm (ET).

Toobin’s TRUE CRIMES AND MISDEMEANORS a real-life legal thriller about the prosecutors and congressional investigators pursuing the truth about Donald Trump’s complicity in several crimes–and why they failed.

Jeffrey Toobin is the bestselling author of The Oath, The Nine, Too Close to Call, A Vast Conspiracy, and The Run of His Life, which was made into the critically acclaimed FX series American Crime Story: The People v. O.J. Simpson. He is a staff writer at The New Yorker and the senior legal analyst at CNN.