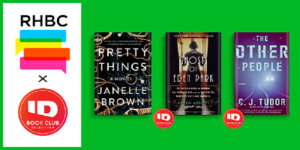 Two wildly different women—one a grifter, the other an heiress—are brought together by the scam of a lifetime in Janelle’s Brown’s PRETTY THINGS. This twisty, mesmerizing novel features two brilliant, damaged women, trying to survive the greatest game of deceit and destruction they will ever play.

Brown is also the author of Watch Me Disappear, All We Ever Wanted Was Everything and This Is Where We Live. An essayist and a journalist, she has written for Vogue, The New York Times, Elle, Wired, Self, the Los Angeles Times, Salon, and numerous other publications. She lives in Los Angeles with her husband and their two children.

Combining deep historical research with novelistic flair, Karen Abbott’s THE GHOSTS OF EDEN PARK is the epic true crime story of the most successful bootlegger in American history and the murder that shocked the nation. A stranger-than-fiction tale of a rags-to-riches entrepreneur and a long-forgotten heroine, of the excesses and absurdities of the Jazz Age, and of the infinite human capacity to deceive.

Abbott is also the New York Times bestselling author of Sin in the Second City, American Rose, and, more recently, Liar, Temptress, Soldier, Spy, named one of the best books of 2014 by Library Journal, the Christian Science Monitor, and Amazon. A native of Philadelphia, she now lives in New York City

C.J. Tudor ‘s OTHER PEOPLE is a gripping thriller about a man’s quest for the daughter no one else believes is still alive,

Tudor is the author of The Hiding Place and The Chalk Man, which won the International Thriller Writers Award for Best First Novel and the Strand Magazine Award for Best Debut Novel. Over the years she has worked as a copywriter, television presenter, voice-over artist, and dog walker. She is now thrilled to be able to write full-time, and doesn’t miss chasing wet dogs through muddy fields all that much. She lives in England with her partner and daughter.