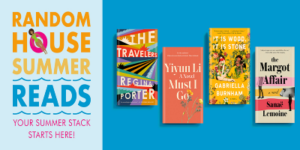 The Random House Summer Reads series continues with a new installment featuring four authors discussing their new books to add to your summer stack via Zoom on Tuesday, September 15 at 8:00 pm (ET).

Literary fiction authors Regina Porter (THE TRAVELERS), Yiyun Li (MUST I GO), Gabriella Burnham (IT IS WOOD, IT IS STONE), and Sanaë Lemoine (THE MARGOT AFFAIR) will be featured. These novelists will take you to New York City; California; São Paulo, Brazil; and Paris, France.

Gabriella Burnham is a dual citizen of the United States and Brazil. Now a New York resident, she lived in São Paulo as a child and most of her family still lives there today. She holds an MFA in creative writing from The Writer’s Foundry at St. Joseph’s College and has been awarded fellowships to MacDowell Colony and Yaddo. She has worked as a reporter, a creative writing teacher, and in immigration law. It Is Wood, It Is Stone is her first novel.

Yiyun Li is the author of six works of fiction—Must I Go, Where Reasons End, Kinder Than Solitude, A Thousand Years of Good Prayers, The Vagrants, and Gold Boy, Emerald Girl—and the memoir Dear Friend, from My Life I Write to You in Your Life. She is the recipient of many awards, including a PEN/Hemingway Award, a PEN/Jean Stein Book Award, a MacArthur Foundation fellowship, and a Windham-Campbell Prize, and was featured in The New Yorker’s 20 Under 40 fiction issue. Her work has appeared in The New Yorker, A Public Space, The Best American Short Stories, and The O. Henry Prize Stories, among other publications. She teaches at Princeton University and lives in Princeton, New Jersey.

Sanaë Lemoine was born in Paris to a Japanese mother and French father, and raised in France and Australia. She earned her undergraduate degree from the University of Pennsylvania and her MFA at Columbia University. She now lives in New York.

Regina Porter is a graduate of the Iowa Writers’ Workshop, where she was an Iowa Arts Fellow and recipient of a 2017-2018 Rae Armour West Postgraduate Scholarship. She is also a 2017 Tin House Summer Workshop Scholar. Her fiction has been published in The Harvard Review. An award-winning writer with a background in playwriting, Porter has worked with Playwrights Horizons, the Joseph Papp Theater, New York Stage and Film, the Women’s Project, Woolly Mammoth Theatre Company, and Horizon Theatre Company. She has been anthologized in Plays from Woolly Mammoth by Broadway Play Services and Heinemann’s Scenes for Women by Women. She has also been profiled in Southern Women Playwrights: New Essays in History and Criticism from the University of Alabama Press. Porter was born in Savannah, Georgia, and lives in Brooklyn.