Join Us for the Hurston/Wright Foundation Virtual Legacy Awards 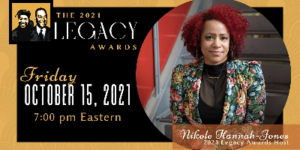 The Zora Neale Hurston/Richard Wright Foundation’s Annual Legacy Awards Ceremony on Friday, October 15 at 7:00 pm (ET) honors the best in Black literature in the United States and around the globe. Introduced in 2001, the Legacy Award was the first national award presented to Black writers by a national organization of Black writers. Since then, Hurston/Wright has recognized nearly 400 works by Black writers in the categories of debut fiction, fiction, nonfiction and poetry, and honored 97 students with College Writing Awards. As longtime partners of the Hurston/Wright Foundation, Penguin Random House is proud to support the only entity of its kind dedicated to discovering, mentoring and honoring Black writers at every stage of their careers.

This year’s event will be hosted by Nikole Hannah-Jones (One World and Kokila author), a Pulitzer Prize-winning reporter covering racial injustice for The New York Times Magazine and creator of the landmark 1619 Project. The event will honor Chimamanda Ngozi Adichie (Knopf), Ibram X. Kendi (One World) and the Calabash International Literary Festival.

Join us for a virtual celebration of Black culture and the voices that make up the Black literary community. Click here to RSVP for the event and hold your spot.