Julian E. Zelizer Discusses BURNING DOWN THE HOUSE in a Virtual Book Talk via Harvard.com(7/21) 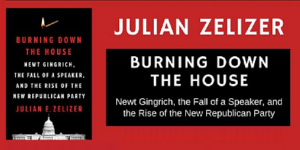 Julian E. Zelizer, author of BURNING DOWN THE HOUSE (Penguin Press), will present a virtual book talk hosted by the Harvard Bookstore (Cambridge, MA) via Harvard.com on Tuesday, July 21 at 7:00 pm (ET).

In BURNING DOWN THE HOUSE, Zelizer pinpoints the moment when our country was set on a path toward an era of bitterly partisan and ruthless politics, an era that was ignited by Newt Gingrich. From the Contract with America to the rise of the Tea Party and the Trump presidential campaign, his fingerprints can be seen throughout some of the most divisive episodes in contemporary American politics. Burning Down the House presents the alarming narrative of how Gingrich and his allies created a new normal in Washington.

Julian E. Zelizer is the Malcolm Stevenson Forbes, Class of 1941 Professor of History and Public Affairs at Princeton University and a CNN Political Analyst. His most recent books are Fault Lines: A History of the United States Since 1974 (co-authored with Kevin Kruse) and The Fierce Urgency of Now: Lyndon Johnson, Congress, and the Battle for the Great Society, the winner of the D.B. Hardeman Prize for Best Book on Congress. Zelizer has been awarded fellowships from the New York Historical Society, the Russell Sage Foundation, the Guggenheim Foundation, and New America.