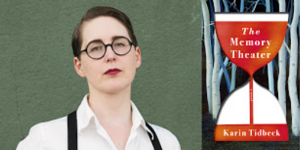 Karin Tidbeck, author of THE MEMORY THEATER (Knopf), will be in conversation with C.L. Polk at a virtual event hosted by A Room of One’s Own Bookstore (Madison, WI) via Crowdcast on Sunday, February 28 at 3:00 pm (ET).

From the award-winning author of Amatka and Jagannath comes a fantastical tour de force about friendship, interdimensional theater, and a magical place where no one ages, except the young. Endlessly inventive, THE MEMORY THEATER takes us to a wondrous place where destiny has yet to be written, life is a performance, and magic can erupt at any moment.

Karin Tidbeck lives in Malmö, Sweden, where they work as a translator and creative writing teacher and write fiction in Swedish and English. Their English-language debut, the story collection Jagannath, received the IAFA William L. Crawford Fantasy Award and was shortlisted for the World Fantasy Award. They are also the author of the novel Amatka.

C.L. Polk is the World Fantasy Award-winning author of the critically acclaimed debut novel Witchmark, which was also nominated for the Nebula, Locus, Aurora, and Lambda Literary Awards. It was named one of the best books of 2018 according to NPR, Publishers Weekly, BuzzFeed, the Chicago Review, BookPage, and the B&N Sci-Fi and Fantasy Blog. She lives in Alberta, Canada.