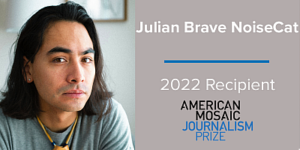 The Heising-Simons Foundation announced that freelance journalists Julian Brave NoiseCat, a Knopf author, and Ryan Christopher Jones are recipients of the 2022 American Mosaic Journalism Prize, awarded for excellence in long-form, narrative, or deep reporting about underrepresented and/or misrepresented groups in the United States. This honor includes an unrestricted cash prize of $100,000 for each recipient.

NoiseCat said, “Indigenous communities have a perspective and an experience that matters to a broader audience. My work is inspired by a belief that Indigenous peoples’ experience and wisdom can contribute to understanding and addressing the world’s most pressing challenges – from the climate crisis to anxieties around imperialism and race.”

NoiseCat’s book for Knopf will weave together reportage on Indigenous peoples in the United States and Canada with a personal narrative about his own journey as a young man and writer, and will be edited by Jonathan Segal, EVP & Executive Editor, Alfred A. Knopf, title and publication date to be announced.

Recognizing journalism’s ability to foster understanding and to support freelance journalists, the American Mosaic Journalism Prize is based on confidential nominations invited from more than 150 leaders in journalism throughout the country. A panel of 10 judges—including journalists from NPR, NBC News, ProPublica/Texas Tribune, The Wall Street Journal, and The Washington Post, among others—selected the recipients.

NoiseCat, a member of the Canim Lake Band Tsq’escen and a descendant of the Lil’Wat Nation of Mount Currie, is a journalist currently based in the Pacific Northwest. His work has appeared in The New York Times, The Washington Post, The New Yorker, The Atlantic, The California Sunday Magazine, and National Geographic, among other outlets.