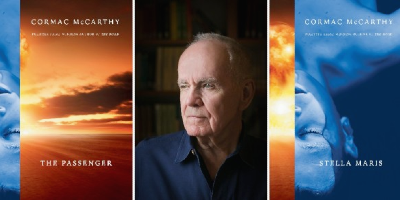 This fall, Alfred A. Knopf will publish two new novels by Cormac McCarthy. The announcement was made by Reagan Arthur, Knopf EVP and Publisher. Rights to the works were sold by Amanda Urban at ICM Partners. In addition to the U.S., the new books will be published in the UK (Picador), Spain (Literatura Random House), Holland (Arbeiderspers), Germany (Rowohlt), Italy (Einaudi), France (Editions de l’Olivier), Sweden (Bonniers), Norway (Gyldendal), Denmark (Gyldendal), Finland (WSOY), and Brazil (Companhia). McCarthy is published in 48 territories across the globe.

The books will be published by Knopf in hardcover, as an ebook, and in audio by Penguin Random House; they will be published in trade paper by Vintage a year later. Picador in the UK will publish simultaneously on each respective date. An announced hardcover first printing of 300,000 copies has been set for each book; the box set first printing will be 50,000 copies. The jackets were designed by Chip Kidd.

“Knopf is thrilled to be publishing two new novels from one of our most celebrated writers,” says Arthur. “For nearly six decades, Cormac McCarthy’s books have changed the literary landscape and influenced generations of authors and artists. The publications of THE PASSENGER and STELLA MARIS will be the literary event of the year. These extraordinary novels are unlike anything Cormac McCarthy has written before, and while both should be read and experienced separately, they represent two sides of the same narrative coin. We are extremely proud to be publishing the remarkable, inimitable work of Cormac McCarthy.”

Jenny Jackson, VP, Executive Editor, and McCarthy’s editor at Knopf says, “It is no small feat for a writer to create a new work in the wake THE ROAD, but with THE PASSENGER and STELLA MARIS, Cormac McCarthy has exceeded our every expectation. These are two stunning, shocking works that manage to be both thrillingly plotted and intellectually exhilarating. We have a plane crash, a trove of gold coins buried deep underground and hidden in copper pipes, a rare Amati violin that vanishes, an abandoned oil rig in the middle of the ocean, and an Italian racecar seized by the IRS—an utterly gripping tale. As exciting as all those elements are, the novels go even further, questioning reality, the existence of God, investigating the history of math, physics, and philosophy, and conjuring a love story that is as pure as it is damned. Bobby and Alicia Western are two of the most captivating characters in recent memory and it’s an enormous privilege to be able to share them with Cormac McCarthy’s legion of readers.”

The novels of Cormac McCarthy have received a number of literary awards, including the Pulitzer Prize, the National Book Award, and the National Book Critics Circle Award. His works adapted to film include ALL THE PRETTY HORSES, THE ROAD, and NO COUNTRY FOR OLD MEN – the latter film receiving four Academy Awards, including the award for Best Picture.

For more insights into THE PASSENGER and STELLA MARIS, see below:

THE PASSENGER is the story of a salvage diver, haunted by loss, afraid of the watery deep, pursued for a conspiracy beyond his understanding, and longing for a death he cannot reconcile with God. 1980, Pass Christian, Mississippi: It is three in the morning when Bobby Western zips the jacket of his wetsuit and plunges from the boat deck into darkness. His divelight illuminates the sunken jet, nine bodies still buckled in their seats, hair floating, eyes devoid of speculation. Missing from the crash site are the pilot’s flightbag, the plane’s black box, and the tenth passenger. But how? A collateral witness to machinations that can only bring him harm, Western is shadowed in body and spirit—by men with badges; by the ghost of his father (one of the inventors of the bomb that melted glass and flesh in Hiroshima); and by his sister, the love and ruin of his soul. Traversing the American South, from the garrulous barrooms of New Orleans to an abandoned oil rig off the Florida coast, THE PASSENGER is a breathtaking novel of morality and science, the legacy of sin, and the madness that is human consciousness.

STELLA MARIS is an intimate portrait of grief and longing, as a young woman in a psychiatric facility seeks to understand her own existence. 1972, Black River Falls, Wisconsin: Alicia Western, twenty years old, with forty thousand dollars in a plastic bag, admits herself to the hospital. A doctoral candidate in mathematics at the University of Chicago, Alicia has been diagnosed with paranoid schizophrenia, and she does not want to talk about her brother Bobby. Instead, she contemplates the nature of madness, the human insistence on one common experience of the world; she recalls a childhood where, by the age of seven, her own grandmother feared for her; she surveys the intersection of physics and philosophy; and she introduces her cohorts, her chimeras, the hallucinations that only she can see. All the while, she grieves for Bobby, not quite dead, not quite hers. Told entirely through the transcripts of Alicia’s psychiatric sessions, STELLA MARIS is a searching, rigorous, intellectually challenging coda to THE PASSENGER, a philosophical inquiry that questions our notions of God, truth, and existence.