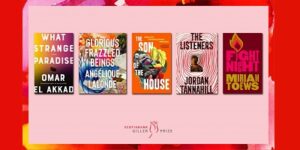 As shared Tuesday on Igloo, Penguin Random House Canada is celebrating its authors Omar El Akkad (published by Knopf in the US) and Miriam Toews with their shortlisting for the 28th Scotiabank Giller Prize. The announcement of the five finalists for the 2021 prize comes following the nomination in September of the twelve-book longlist – five of them published by us – for Canada’s most prestigious literary award.

Penguin Random House has published the past three Giller Prize winners—Souvankham Thammavongsa in 2020, Ian Williams in 2019, and Esi Edugyan in 2018—and we have high hopes that one of PRH’s two shortlisted authors may follow in their footsteps when the 2021 winner is announced in November.

Our PRH finalists, as revealed in a live ceremony on October 5, are:

As reported on Igloo last month, our other longlisted titles for the 2021 Giller Prize were ASTRA by Cedar Bowers (McClelland & Stewart), EM by Kim Thúy and translated by Sheila Fischman (CA: Random House Canada, US: Seven Stories Press, a PHRPS client publisher), and THE STRANGERS by Katherena Vermette (Hamish Hamilton Canada).

The 2021 prizewinner will be announced on the evening of November 8 in the first live edition of the Giller Prize Gala since 2019. It will be hosted by actor Paul Sun-Hyung Lee and poet Rupi Kaur. The victor takes home a prize of $100,000, while each finalist will receive $10,000, making the Giller the richest literary prize in Canada.

On September 14, the judges for the 2021 Booker Prize took a major step to determine this year’s winner. Their short list of six titles has…