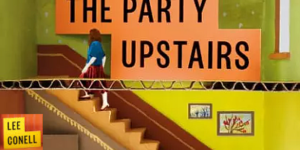 Lee Conell, author of THE PARTY UPSTAIRS (Penguin Press), will be in conversation with Margot Livesey At Home with Literati virtually via Zoom on Wednesday, July 29 at 7:00 (ET).

THE PARTY UPSTAIRS is an electrifying debut novel that unfolds in the course of a single day inside one genteel New York City apartment building, as tensions between the building’s super and his grown-up daughter spark a crisis that will, by day’s end, change everything.

Conell is also the author of the story collection Subcortical, which was awarded The Story Prize’s Spotlight Award. Her short fiction has received the Chicago Tribune’s Nelson Algren Award and appears in the Oxford American, Kenyon Review, Glimmer Train, American Short Fiction, and elsewhere. She is a 2020 National Endowment for the Arts Fellow as well as the recipient of creative writing fellowships from the Japan-United States Friendship Commission, the Tennessee Arts Commission, and the Sewanee Writers’ Conference.