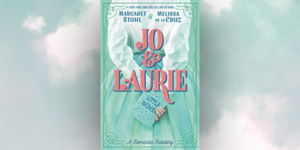 1869, Concord, Massachusetts: After the publication of her first novel, Jo March is shocked to discover her book of scribbles has become a bestseller, and her publisher and fans demand a sequel. While pressured into coming up with a story, she goes to New York with her dear friend Laurie for a week of inspiration–museums, operas, and even a once-in-a-lifetime reading by Charles Dickens himself!

But Laurie has romance on his mind, and despite her growing feelings, Jo’s desire to remain independent leads her to turn down his heartfelt marriage proposal and sends the poor boy off to college heartbroken. When Laurie returns to Concord with a sophisticated new girlfriend, will Jo finally communicate her true heart’s desire or lose the love of her life forever?