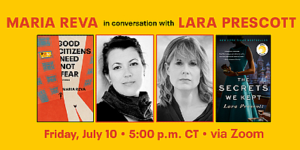 Maria Reva, author of GOOD CITIZENS NEED NOT FEAR: Stories (Doubleday), will be in conversation with Lara Prescott, author of THE SECRETS WE KEPT (Vintage), at a virtual event hosted by Brazos Bookstore Zoom on Friday, July 10 at 5:00 pm (ET).

A brilliant and bitingly funny collection of stories united around a single crumbling apartment building in Ukraine, GOOD CITIZENS NEED NOT FEAR tacks from moments of intense paranoia to surprising tenderness and back again, exploring what it is to be an individual amid the roiling forces of history. Inspired by her and her family’s own experiences in Ukraine, Reva brings the black absurdism of early Shteyngart and the sly interconnectedness of Anthony Marra’s Tsar of Love and Techno to a “bang-on brilliant” (Miriam Toews) collection that is “fearless and thrilling” (Bret Anthony Johnston), and as clever as it is heartfelt.

Reva was born in Ukraine and grew up in Vancouver, British Columbia. She has an MFA in fiction from the Michener Center at the University of Texas. Her work has appeared in Best American Short Stories (2017 and 2019), McSweeny’s and Granta. She currently lives in Austin, Texas, and also works as an opera librettist.

THE SECRETS WE KEPT combines a legendary literary love story—the decades-long affair between Pasternak and his mistress and muse, Olga Ivinskaya, who inspired Zhivago’s heroine, Lara—with a narrative about two women empowered to lead lives of extraordinary intrigue and risk. Told with soaring emotional intensity and captivating historical detail, this is an unforgettable debut: a celebration of the powerful belief that a work of art can change the world.

Prescott received her MFA from the Michener Center for Writers at the University of Texas, Austin. She was previously an animal protection advocate and a political campaign operative. Her stories have appeared in The Southern Review, The Hudson Review, Crazyhorse, Day One, and Tin House Flash Fridays. She won the 2016 Crazyhorse Fiction Prize for the first chapter of The Secrets We Kept. She lives in Austin, Texas.