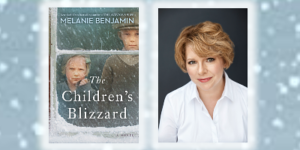 THE CHILDREN’S BLIZZARD, the new novel by New York Times bestselling author Melanie Benjamin, tells a story of courage on the American prairie, inspired by actual events. On the afternoon of January 12, 1888—a day that had dawned surprisingly warm—a ferocious storm hit the Great Plains right as school was letting out. It would come to be known as “The Children’s Blizzard,” since hardest hit were the schoolchildren in the one-room prairie schoolhouses, and their teachers—children themselves, barely out of the schoolroom—who had to make life and death decisions in an instant. Should they let their pupils make a run for it, hoping they would make it home in time? Or keep them there and risk freezing to death in poorly insulated shacks, hoping for eventual rescue? Published by Delacorte Press,THE CHILDREN’S BLIZZARD unfolds through the perspectives of two sisters who make vastly different choices— and find their destinies changed irrevocably, forever labeled for their actions.

In this Behind the Pages Igloo feature, Melanie Benjamin shares what inspired her to write this novel as well as the research and process involved in bringing the book to fruition:

“I had so many reasons why I wanted to write THE CHILDREN’S BLIZZARD! I’d long wanted to write a more ‘western’ novel, and I was looking to write something grittier, something with even more sweep and scope than my previous novels; a true saga, not just the novelization of a particular person’s life. This particular historical event was known to me, and as I thought about it, the ideas began to take root: This was in many ways a novel of immigrants, Northern European immigrants. It was an ode to teachers. It could be a thriller, too, in a Jack London kind of way: Survival against the elements. But in this case, it wouldn’t be man vs. nature, but rather—children and young women. I could see the personal stories playing out against this menacing storm. And too, I’m from the Midwest. I grew up in Indiana, and my mother’s side of the family left Germany about a decade prior to the Children’s Blizzard to farm in Illinois. So this was a novel set in my own heartland; I even named some of the children in the novel after my relatives, including my grandparents.

“For research, I re-read Willa Cather’s novels and read the excellent nonfiction book about the blizzard by David Laskin, as well as a collection of oral histories of some of the survivors. I was well-acquainted with the landscape of Nebraska since I’ve driven through the entire state many times, visiting my son in Colorado. (To drive to Denver from Chicago, where we lived at the time, you pretty much have to drive across all of Nebraska.) And I knew Omaha fairly well. But the one bit of research that may be surprising is that I watched a classic movie, DR. ZHIVAGO. I watched that film several times as inspiration for the scenes in the blizzard itself! There is no movie that captures snow and cold the way that movie does.

“When I was nearing the end of the book, a blizzard hit Denver where my son lived at the time. I told him that if he truly loved me, he would go out on the prairie without a coat and gloves and report back to me how it felt. For some reason, he declined. But I still love him anyway.”

A selection of praise for Benjamin and THE CHILDREN’S BLIZZARD:

A PROMISED LAND by Barack Obama Sells More Than 3.3 Million Units in U.S. and Canada in its First Month of Publication

Penguin Random House has announced that Barack Obama’s A PROMISED LAND has sold 3,320,000 units across all formats and editions in the U.S. and Canada during…

Pantheon Books will publish a new novel by the African writer, Nobel Laureate and political activist Wole Soyinka on September 28, 2021. The book, CHRONICLES FROM…

Wondering how to keep your kids reading, learning, and entertained over their winter break? Sign them up for Random House Children’s Books and Sylvan Learning’s first-ever…

Steve Leder In Conversation with Claire Bidwell Smith via reimagine.org (12/17)

Rabbi Steve Leder, author of THE BEAUTY OF WHAT REMAINS: How Our Greatest Fear Becomes Our Greatest Gift (Avery), will discuss his upcoming book with Claire…