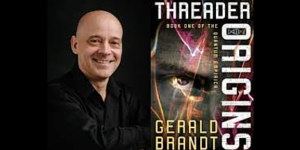 Gerald Brandt, author of THREADER ORIGINS (DAW), will be in conversation with Jason M. Hough at a virtual event hosted by Mysterious Galaxy via Crowdcast on Tuesday, January 12 at 10:00 pm (ET).

THREADER ORIGINS is the first book of a new sci-fi series introduces an alternate earth where powerful Threads have the power to alter reality as we know it. But Thread use comes at a price. Follow the possibilities and probabilities too far and the human mind shatters, leaving the Threader a mindless, drooling husk. Yet the Thread’s pull is almost irresistible, and a constant battle for those that can see them.

Gerald Brandt is an international bestselling author of science fiction and fantasy, and the author of the cyberpunk San Angeles sci-fi trilogy: The Courier, The Operative, and The Rebel. The first of the trilogy was a finalist for the Aurora Award for Best Novel. His short story “Storm” appeared in the 2013 Prix Aurora Award-winning anthology Blood & Water. By day, he’s an IT professional and coding guru. In his limited spare time, he enjoys riding his motorcycle, rock climbing, camping, and spending time with his family. He lives in Winnipeg with his wife Marnie, and their two sons Jared and Ryan.