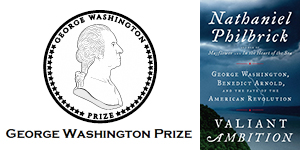 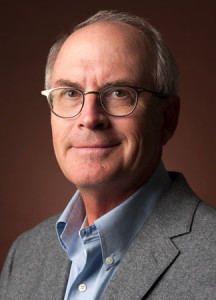 “To have Valiant Ambition recognized in this way means a tremendous amount to me, especially given the extraordinary quality of the books produced by the other six finalists,” said Mr. Philbrick. “My heartfelt thanks to the jurors involved in the selection process and to the George Washington Prize’s sponsoring institutions.”

VALIANT AMBITION is a surprising account of the middle years of the American Revolution and the tragic relationship between George Washington and Benedict Arnold. Philbrick creates a complex, controversial, and dramatic portrait of a people in crisis and of the war that gave birth to a nation.

“Our objective in creating the Washington Prize was to stimulate scholarly works that are accessible to the general public,” said Mount Vernon president Curt Viebranz. “This year’s finalists confirm that we are succeeding; Nat Philbrick’s VALIANT AMBITION is at once a detailed and accurate account of the relationship between George Washington and Benedict Arnold as well as an engaging read.”

Established in 2005, the George Washington Prize has honored a dozen leading writers on the Revolutionary era including, Lin-Manuel Miranda, creator of the hit musical Hamilton. For this year’s prize, a distinguished jury comprised of notable historians David Preston, Kathleen DuVal, and Nick Bunker, selected the finalists from a field of nearly 60 books.