A new book that looks into the accusations of collusion between the Trump campaign and Russia will be published by Vintage Books, and simultaneously around the world, on November 16.  COLLUSION: Secret Meetings, Dirty Money, and How Russia Helped Donald Trump Win by Luke Harding, a foreign correspondent for The Guardian, brings the details of the Trump-Russia story together in one place for the first time. 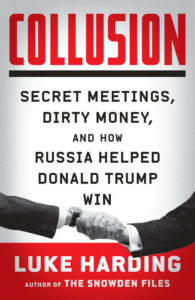 In COLLUSION, Harding explodes the Trump-Russia story, detailing what happened, to whom, where, and when. Harding, whose work as a foreign correspondent resulted in his being deported by the Kremlin in 2011, offers readers a sobering timeline dating back to 1987 and continuing through the present day, including last week’s indictments.

In December 2016, Harding met former MI6 officer Christopher Steele in a London pub to discuss President-elect Donald Trump’s Russia connections. This was before Steele’s now-famous dossier dropped. “The key to the Trump-Russia story,” says Harding, “is being able to follow the money, see what deals were made when and by whom, and what relationships were being cultivated and why.”

Harding’s investigation looks at Russian players Aras Agalarov, Natalia Veselnitskaya, Sergei Kislyak, and Igor Sechin, among others, and their ability to exploit relationships with principals in and on the periphery of the Trump campaign. Among those Harding reports on in the book: Paul Manafort, Rick Gates, George Papadopoulos, Michael Flynn, Donald Trump Jr., and Jared Kushner.

“Luke Harding’s COLLUSION is the first book to connect the dots on the Trump-Russia story,” said Anne Messitte, Publisher of Vintage Books. “For anyone who wants context to understand the headlines and what is to come, it’s a must-read.”