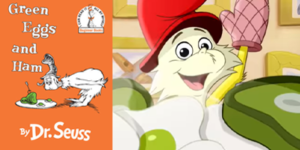 Series creator Jared Stern told Variety that the first thing he did was re-read the Random House Children’s Books title: “I started flipping through, and I go, ‘OK, it’s an odd-couple story, right?’ It’s a classic mismatched buddy thing: grumpy guy who’s closed off, silly guy who’s open and pushy. But not only that, it’s a road trip, because he won’t eat them here, and he won’t eat them there; he won’t eat them in a car, in a boat, in a train. And so I was like, ‘It’s Planes, Trains and Automobiles. It’s Midnight Run.’ Two of my favorite movies. I just love that genre, and so I was like, ‘What if you did that genre but in a Seuss land?’”

Stern also shared: “There were four years of actual production. That was intentional, and that’s about normal for the quality of animation that we were aspiring to. A typical animated film can take close to three to four years for generally an hour and a half of content. We have, I believe, around five and a half hours of content that we were trying to do at the level of a hand-drawn animated feature in that same amount of time … If you’re going to tell 13 episodes, you need to add a bit more, but I started from the kernel of the book.”