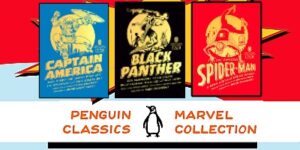 The Penguin Classics Marvel Collection, the first time comics have been published by Penguin Classics, introduced the first three books in the series – BLACK PANTHER, CAPTAIN AMERICA, and THE AMAZING SPIDER-MAN  — this month. Each title is published in black spine paperback as well as a collectible hardcover edition with beautiful gold foil stamping, gold top stain edges and endpapers featuring artwork from the comics. They each include a foreword by a contemporary young adult author and a detailed scholarly introduction, speaking to the enduring significance of Marvel’s iconic creations.

The debut of the Penguin Classics Marvel Collection generated much media attention, including prime coverage in BuzzFeed and the Chicago Tribune, as well as a feature in Rolling Stone, which had high praise for the series and Penguin Classics, saying, in part, “You can pick them out by sight on book shelves: the trade paperbacks with the Gill Sans and Perpetua typeface font, the austere black spines — all the better to make the orange-and-white lettering stand out, my dear — and the tiny flightless-fowl logo. This is the signature design of Penguin Classics, the division of Penguin Publishing that, for over 75 years, has put the canon of Western literature from Homer to Hawthorne in the hands of readers. It’s a distinct look that screams, ‘You are in the presence of a Very. Important. Book.’ Bibliophiles have been known to reflexively drool on sight when they spot them…[Comics] are the closest things we have to modern mythologies, and these tales of gods and monsters, heroes and villains aren’t just childish things to be put away after childhood’s end. They deserve to be discussed in the same breath as other classics of the literary form.”

Penguin Classics VP & Publisher Elda Rotor told Rolling Stone: “I could already start to see what these comics might look like if you put them between our covers and within the black spines of our editions. It didn’t take that much convincing to think about how exciting it would be to put out works which are already parts of readers’ personal canons. It’s already part of the history of American literary storytelling. They are already considered to be classics for their communities.”

Ben  Saunders,  editor  of  the  series and a comic books aficionado,  says,  “The  comics  produced  at  Marvel  in  the  1960s  can  be  compared  to  the  most  enduring  popular  music  of  that  same  tumultuous  decade.  Working at tremendous speed in what was widely regarded as a low-status commercial medium, the creators at Marvel initiated and participated in an aesthetic revolution. These comics have now influenced writers and artists across all forms of media — from contemporary novelists to hip hop musicians to Hollywood filmmakers.  It is not hyperbole but simply a fact: these classic Marvel Comics are foundational documents of our culture.”