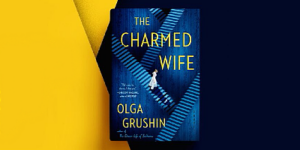 Olga Grushin will discuss her new novel, THE CHARMED WIFE (Putnam), in conversation with Jeniffer Thompson at a virtual event hosted by Warwick’s via Facebook Live on Thursday, January 14 at 7:00 pm (ET).

Endlessly surprising, wildly inventive, and decidedly modern, THE CHARMED WIFE weaves together time and place, fantasy and reality, to conjure a world unlike any other. Nothing in it is quite what it seems–the twists and turns of its magical, dark, and swiftly shifting paths take us deep into the heart of what makes us unique, of romance and marriage, and of the very nature of storytelling.

Olga Grushin was born in Moscow and moved to the United States at eighteen. She is the author of three previous novels, Forty Rooms, The Line and The Dream Life of Sukhanov. Her debut, The Dream Life of Sukhanov, won the New York Public Library Young Lions Fiction Award, earned her a place on Granta’s once-a-decade Best Young American Novelists list, and was one of The New York Times’ Notable Books of the Year. Both it and The Line were among The Washington Post’s Ten Best Books of the Year, and Forty Rooms was named a Kirkus Reviews Best Fiction of the Year. Grushin writes in English, and her work has been translated into sixteen languages. She lives outside Washington, DC, with her two children.