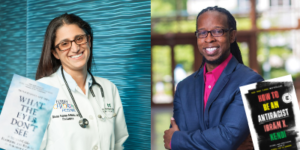 Ibram X. Kendi, author of HOW TO BE AN ANTIRACIST (One World), and Dr. Mona Hanna-Attisha, author of WHAT THE EYES DON’T SEE (One World), will be in conversation with One World Senior Editor Nicole Counts at the One World Ideas x Action RH virtual event via Zoom on Thursday, May 14 at 8:00pm (ET).

In HOW TO BE AN ANTIRACIST, Kendi weaves an electrifying combination of ethics, history, law, and science with his own personal story of awakening to antiracism. This is an essential work for anyone who wants to go beyond the awareness of racism to the next step: contributing to the formation of a just and equitable society. Kendi is a New York Times bestselling author and the founding director of the Antiracist Research and Policy Center at American University.

WHAT THE EYES DON’T SEE is the inspiring story of how Dr. Mona Hanna-Attisha, alongside a team of researchers, parents, friends, and community leaders, discovered that the children of Flint, Michigan, were being exposed to lead in their tap water—and then battled her own government and a brutal backlash to expose that truth to the world. This shameful disaster became a tale of hope, the story of a city on the ropes that came together to fight for justice, self-determination, and the right to build a better world for their—and all of our—children. Dr. Mona is a physician, scientist, and activist, awarded the Freedom of Expression Courage Award by PEN America, and named one of Time magazine’s 100 Most Influential People in the World.