PEN America, the U.S. chapter of the world’s leading international literary-human rights organization, has announced the winners in selected categories for its 2017 Literary Awards, with titles published by Penguin Random House imprints winning for nonfiction, diversity, science and sports writing: 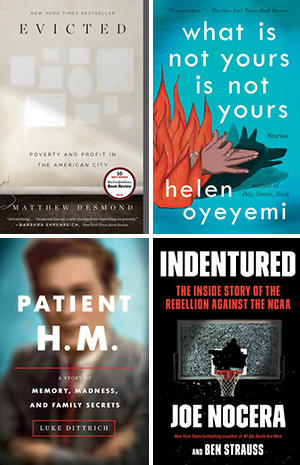 EVICTED: Poverty and Profit in the American City by Matthew Desmond (Crown)

INDENTURED: The Inside Story of the Rebellion Against the NCAA by Joe Nocero and  Ben Strauss (Portfolio)

Warm congratulations to all of our award-winning authors, their editors and publishers.

Additional 2017 PEN America Literary Awards recipients will be revealed at the PEN Ceremony March 27 at The New School’s Auditorium in NYC.

THE RETURN: Fathers, Sons, and the Land in Between by Hisham Matar (Random House)

DARK MONEY: The Hidden History of The Billionaires Behind the Rise of the Radical Right by Jane Mayer (Doubleday)

PEN/Diamonstein-Spielvogel Award for the Art of the Essay