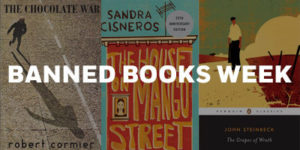 THE HOUSE ON MANGO STREET by Sandra Cisneros

Told in a series of vignettes—sometimes heartbreaking, sometimes deeply joyous—it is the story of a young Latina girl growing up in Chicago, inventing for herself who and what she will become.

THE GRAPES OF WRATH by John Steinbeck

First published in 1939, Steinbeck’s Pulitzer Prize–winning epic of the Great Depression chronicles the Dust Bowl migration of the 1930s and tells the story of one Oklahoma farm family, the Joads, driven from their homestead and forced to travel west to the promised land of California.

THE CHOCOLATE WAR by Robert Cormier

One of the most controversial YA novels of all time, The Chocolate War is a modern masterpiece that speaks to fans of S. E. Hinton’s The Outsiders and John Knowles’s A Separate Peace. After suffering rejectionfrom seven major publishers, The Chocolate War made its debut in 1974, and quickly became a bestselling—and provocative—classic for young adults. This chilling portrait of an all-boys prep school casts an unflinching eye on the pitfalls of conformity and corruption in our most elite cultural institutions.