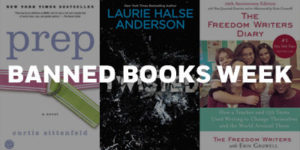 Curtis Sittenfeld’s debut novel, Prep, is an insightful, achingly funny coming-of-age story as well as a brilliant dissection of class, race, and gender in a hothouse of adolescent angst and ambition.

Attracting the queen bee Bethany Milbury’s attention sets off a string of events and changes that have Tyler questioning his place in the school, in his family, and in the world. Acclaimed Laurie Halse Anderson tackles a very controversial subject: what it means to be a man today.

As an idealistic twenty-three-year-old English teacher at Wilson High School in Long beach, California, Erin Gruwell confronted a room of “unteachable, at-risk” students. One day she intercepted a note with an ugly racial caricature, and angrily declared that this was precisely the sort of thing that led to the Holocaust—only to be met by uncomprehending looks.