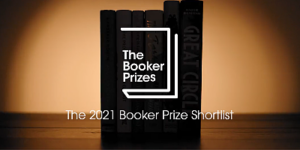 Herewith our six finalists for one of the world’s most coveted annual literary-fiction awards:

These finalists are selected from the 13 long listed titles presented in July. The Prize is open to works by writers of any nationality written by them in English and published in the U.K. or Ireland.

PRH titles were last recognized with the Booker in 2019, when The Testaments by Margaret Atwood and Bernardine Evaristo’s Girl, Woman, Other shared the prize.

Next stop: The Booker Prize dinner in London on November 3.