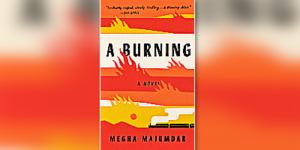 Megha Majumdar, author of A BURNING (Knopf), a topical New York Times bestseller, will be featured at a special Penguin Bookshop Writers Series virtual event via Zoom on Wednesday, September 16, at 7:00 pm (ET).

A BURNING is an electrifying debut novel about three unforgettable characters that seek to rise–to the middle class, to political power, to fame in the movies–and find their lives entangled in the wake of a catastrophe in contemporary India. Taut, symphonic, propulsive, and riveting from its opening lines, it has the force of an epic while being so masterfully compressed it can be read in a single sitting.

Ms. Majumdar was born and raised in Kolkata, India. She moved to the United States to attend college at Harvard University, where she was a Traub Scholar, followed by graduate school in social anthropology at Johns Hopkins University. She works as an associate editor at Catapult, and lives in New York City.