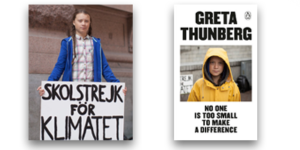 Greta Thunberg is TIME magazine’s 2019 Person of the Year. This is the first time the publication has bestowed the highly regarded honor on a teenager, making the 16-year-old Swedish climate change activist its youngest ever Person of the Year. TIME notes: “Thunberg is not a leader of any political party or advocacy group. She is neither the first to sound the alarm about the climate crisis nor the most qualified to fix it. She is not a scientist or a politician. She has no access to traditional levers of influence: she’s not a billionaire or a princess, a pop star or even an adult. She is an ordinary teenage girl who, in summoning the courage to speak truth to power, became the icon of a generation. By clarifying an abstract danger with piercing outrage, Thunberg became the most compelling voice on the most important issue facing the planet.” To read TIME’s 2019 Person of the Year cover story, click here.

Thunberg is a Penguin Press author and her book, NO ONE IS TOO SMALL TO MAKE A DIFFERENCE, collects, for the first time, her speeches that have made history across the globe, from the United Nations to Capitol Hill and mass street protests. Her book is a rallying cry for why we must all wake up and fight to protect the living planet. To watch a Greta Thunberg highlight video on the Penguin Press Facebook page, click here.

In August 2018, Thunberg started a school strike that became a movement called Fridays For Future, which has inspired school strikes for climate action in more than 150 countries involving millions of students. Thunberg has spoken at climate rallies across Europe, and at the United Nations COP24 in Poland, the World Economic Forum in Davos, and at the UN Climate Action Summit in New York City. She has won the prestigious Prix Liberté and been nominated for a Nobel Peace Prize. Thunberg is vegan, and doesn’t fly, in order to live a low-carbon life.