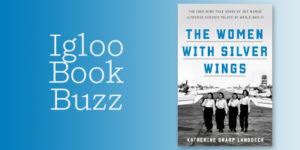 Our new Igloo Book Buzz selection is Katherine Sharp Landdeck’s THE WOMEN WITH SILVER WINGS: The Inspiring True Story of the Women Air Force Service Pilots of World War II, published by Crown on April 21. This remarkable book tells the riveting true story of the Women Airforce Service Pilots (WASP), an elite group of over a thousand women who flew planes for the United States military during World War II.

“The women profiled in THE WOMEN WITH SILVER WINGS were incredibly inspiring,” says Landdeck. “They survived the Great Depression, faced danger and tragedy during World War II, dealt with the realities of post-war adjustment, fought for recognition in the 1970s, were celebrated with the Congressional Gold Medal, and then fought again to be interred at Arlington National Cemetery. These women faced real, global crises, and made it through. They pushed against the limits of their times and supported others in their journey. I was honored to know many of these women personally, and I’ve drawn on their stories for inspiration in tough times like the one we’re in now. I hope that in sharing some of these stories, THE WOMEN WITH SILVER WINGS will inspire readers to face their own challenges with grit, determination, and good humor.”

Crown Editor Emma Berry says, “The story Kate Landdeck set out to tell in THE WOMEN WITH SILVER WINGS was incredibly ambitious–we’re talking about a program that included more than 1,100 women, and over 75 years of material, from their first experiences in the sky to their final fight to be buried in Arlington National Cemetery. Luckily, Kate could not have been more suited to the task. Not only is she a historian who has spent her career researching the WASP, she’s also a pilot herself, and a close friend of many of the WASP and their families–all of which allowed her to write a book that captures the sweep of history through a personal, intimate, and character-driven lens. It was such a pleasure working with Kate to tell the stories of these remarkable women, and I can’t wait for readers to meet them.”

THE WOMEN WITH SILVER WINGS has generated high praise. Here is a selection: