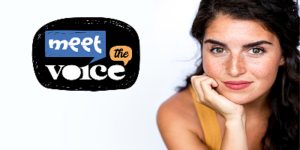 Frankie chats with Dan about how she got her start in audiobooks, her love of storytelling, and why it’s meaningful for her to narrate books featuring characters that share her Latinx heritage, such as Silva Moreno-Garcia’s MEXICAN GOTHIC and Tehlor Kay Mejia’s PAOLA SANTIAGO AND THE RIVER OF TEARS.

With Meet the Voice, PRH Audio puts the spotlight on its narrators through one-on-one discussions with their producers. The narrators talk about their careers, what it’s like inside and outside of the recording booth, and some of their recent narrations.

To watch Frankie Corzo and Dan Zitt on Meet the Voice, click on the video window below: