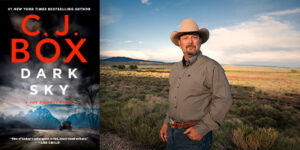 The Western Writers of America (WWA) announced its 2022 Spur Award winners on Saturday, March 12, at the Tucson Festival of Books and #1 New York Times bestselling G.P. Putnam’s Sons author C. J. Box earned the Spur prize in the contemporary novel category for DARK SKY, a Joe Pickett novel. Box previously won this award in 2017 for another Joe Pickett novel, OFF THE GRID.

Congratulations to Mr. Box, his editor, and everyone at Putnam.

Mr. Box has also won the Edgar, Anthony, Macavity, Gumshoe, and two Barry awards, as well as the French Prix Calibre .38 and a French Elle magazine literary award. OPEN SEASON, his first novel in the Joe Pickett series, was a Spur finalist in 2002.

To view all of the 2022 Spur Award winners, click here.

Since 1953, Western Writers of America has promoted and honored the best in Western literature with the annual Spur Awards, selected by panels of judges. Awards, for material published last year, are given for works whose inspiration, image and literary excellence best represent the reality and spirit of the American West.