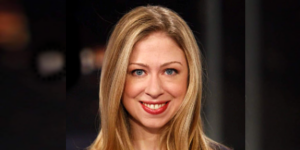 Philomel Books, an imprint of Penguin Young Readers, has announced the expansion of Chelsea Clinton’s #1 New York Times bestselling SHE PERSISTED series, which has more than 1.3 million copies in print in North America, with a new on-sale date for SHE PERSISTED IN SPORTS: American Olympians Who Changes the Game, releasing September 22, 2020, and a new children’s chapter book series for readers ages 6- 9, launching January 2021.

“With these new books, my hope is to expand what young readers see as possible for themselves, their sisters, classmates, friends and our world,” said Chelsea Clinton. “And, I hope that all children – boys and girls alike – will continue to be inspired and empowered by the incredible women whose persistence has helped make our world brighter, more exciting, healthier and more just.”

SHE PERSISTED IN SPORTS will celebrate American women who have faced their own unique set of challenges, across countless sports and levels of play, and excelled because of their persistence. Women in the book include Margaret Ives Abbott, Gertrude Ederle, Mildred “Babe” Didrikson Zaharias, Wilma Rudolph, Jean Driscoll, Mia Hamm and the 1996 Olympic soccer team, Kristi Yamaguchi, Venus and Serena Williams, Misty May-Treanor and Kerri Walsh Jennings, Diana Taurasi, Simone Biles, Ibtihaj Muhammad and Jocelyne and Monique Lamoureux. A Spanish-language edition, Ella Persistió en el Deporte, will be concurrently released.

The chapter books, inspired by Chelsea Clinton and Alexandra Boiger’s #1 New York Times bestselling SHE PERSISTED picture books, will launch in January 2021 with the publication of She Persisted: Harriet Tubman, written by acclaimed, New York Times bestselling and Coretta Scott King Book Award-winning author Andrea Davis Pinkney. A new installment will publish each month, with a bonus edition in December. Each 80-page book will focus on one of the 13 women featured in SHE PERSISTED: 13 American Women Who Changed the World, and will feature an introduction by Chelsea Clinton, cover art by Alexandra Boiger, and black and white interior illustrations by Gillian Flint.

“Chelsea Clinton’s books have sparked important conversations about the achievements of women,” said Andrea Davis Pinkney author of the first installment of the SHE PERSISTED chapter book series. “It’s an honor to be among the ‘Persisterhood’ of authors Chelsea has assembled to introduce such an impressive collection of notable sheroes. Harriet Tubman’s story is especially relevant today. Harriet’s persistence, ingenuity, and grit brought the rights of women and people of color onto the national stage, and helped define the true meaning of equality as we currently know it.”

Chelsea Clinton is the author of the #1 New York Times bestselling picture book SHE PERSISTED: 13 American Women Who Changed the World, which was praised in a starred review by Publishers Weekly as a “lovely, moving work of children’s literature [and a] polished introduction to a diverse and accomplished group of women.” She is also the author of the picture book GRANDMA’S GARDENS, co-written with Hillary Rodham Clinton, and the forthcoming SHE PERSISTED IN SPORTS: American Olympians Who Changes the Game. Her other books include the New York Times bestsellers DON’T LET THEM DISAPPEAR: 12 Endangered Species Across the Globe; Start Now! You Can Make a Difference; SHE PERSISTED AROUND THE WORLD: 13 Women Who Changed History; IT’S YOUR WORLD: Get Informed, Get Inspired & Get Going!; THE BOOK OF GUTSY WOMEN: Favorite Stories of Courage and Resilience, co-written with Hillary Rodham Clinton; and GOVERNING GLOBAL HEALTH: Who Runs the World and Why?, co-written with Devi Sridhar. Chelsea Clinton is the Vice Chair of the Clinton Foundation, where she works on many initiatives including those that help to empower the next generation of leaders. She lives in New York City with her husband, Marc, their children, and their dog, Soren.

Our new Igloo Book Buzz selection is Eddie Glaude Jr.’s BEGIN AGAIN: James Baldwin’s America and Its Urgent Lessons for Our Own, published by Crown. Mixing…

“With these new books, my hope is to expand what young readers see as possible for themselves, their sisters, classmates, friends and our world," said Chelsea…

Aimee Bender, author of THE BUTTERFLY LAMPSHADE (Doubleday), will discuss her new novel with Jessica Chandler at a virtual event hosted by Charis Books via Crowdcast…

There’s a Book for That: Comic-Con

July is a big month for fandom and creators at Comic-Con International. Canceled because of the pandemic, this year the event will only be available online…

Carrie Finison will launch her new picture book, DOZENS OF DOUGHNUTS (Putnam Books for Young Readers), with a virtual storytime event hosted by Belmont Books via…

A BuzzBooks Romance Panel hosted by Publishers Lunch will feature Denise Williams, author of HOW TO FAIL AT FLIRTING (Berkley) and her editor Kerry Donovan, plus…