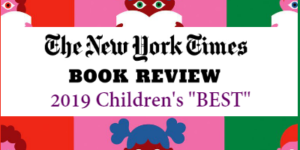 Here are the five Penguin Random House titles selected by the editors of the New York Times Book Review for “The 25 Best Children’s Books of 2019.”

Now online, the complete list is published in the TBR’s December 8 print edition.

MY PAPI HAS A MOTORCYCLE by Isabel Quintero, illustrated by Zeke Pena (Kokila)

A girl takes a joyful spin on the back of her carpenter papi’s motorcycle, greeting friends and relatives, noting historical murals and stopping at his work site.

ALL THE GREYS ON GREENE STREET by Laura Tucker (Viking)
The artistic 12-year-old at the center of this debut, set in 1981 New York City, learns to live with her father’s departure and her mother’s clinical depression.

THE FOUNTAINS OF SILENCE by Ruta Sepetys (Philomel)
Set in Franco-era Spain, a hotel chambermaid risks her life to gather evidence against her country’s fascist regime.

FRANKLY IN LOVE by David Yoon (Putnam)
This coming-of-age story, a Korean-American boy secretly dates a white girl despite the disapproval of his parents.

PET by Akwaeke Emezi (Make Me a World)
A National Book Award finalist, a 15-year-old trans girl living in a utopian society must convince her community that monsters are among them.

THE LOST COUSINS written and illustrated by B.B. Cronin (Viking)