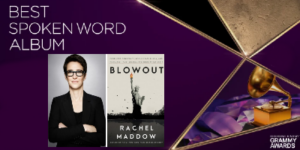 Music to our ears.

The members of the Recording Academy have voted the Random House Audio production of BLOWOUT by Rachel Maddow the winner of the 2021 GRAMMY® for Best Spoken Word Album. The host of her eponymous MSNBC nightly hour, reading from her Crown print and e-book, Maddow’s BLOWOUT received its GRAMMY® Sunday afternoon, March 14, during the GRAMMY Awards Premiere Ceremony® in Los Angeles, ahead of the CBS-TV national telecast that evening.

BLOWOUT is our author’s second GRAMMY® nomination. Her #1 bestselling DRIFT: The Unmooring of American Military Power was a Best Spoken Word Album nominee in 2012.

It was produced by Aaron Blank, an Audio colleague, and a previous Spoken Word GRAMMY®-winning producer.

Over the years, the titles published by Penguin Random House Audio have received 46 GRAMMY® nominations, winning in the Spoken Word category 17 times.

Big, mellifluous congratulations to Rachel Maddow, Aaron Blank, and of course to our exceptional Audio division, led by Amanda D’Acierno.

BLOWOUT is our author’s second GRAMMY® nomination. Her #1 bestselling DRIFT: The Unmooring of American Military Power was a Best Spoken Word Album nominee in 2012.…