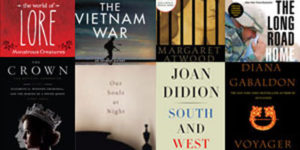 This year’s fall television and streaming season is upon us, with a number of new shows, series and films based on books published by Penguin Random House imprints, as well as two new books of ours based on the programming itself. The following viewers and readers guide shines the spotlight on this diverse selection:

Ken Burns and Lynn Novick’s ten-part, 18-hour PBS-TV documentary series, THE VIETNAM WAR, tells the epic story of one of the most consequential, divisive, and controversial events in American history as it has never before been fully presented on film. THE VIETNAM WAR: An Intimate History by Geoffrey C. Ward and Ken Burns is the expansive, richly illustrated Knopf book based on the series. Ten years in the making, the series includes rarely seen and digitally re-mastered archival footage from sources around the globe, photographs taken by some of the most celebrated photojournalists of the 20th Century, historic television broadcasts, evocative home movies, and secret audio recordings from inside the Kennedy, Johnson, and Nixon administrations. The book, which serves as a companion to the series, plunges us into the chaos and intensity of combat, even as it explains the rationale that got us into Vietnam and kept us there for so many years. Rather than taking sides, the book and series seek to understand why the war happened the way it did, and to clarify its complicated legacy.

Airing throughout September on PBS television stations, the series is also streaming on PBS apps.

The third season of the highly-rated Starz adaptation of Diana Gabaldon’s multi-million-bestselling Outlander series focuses primarily on the third book in the series, VOYAGER (Dell), continuing the story of Claire Randall and Jamie Fraser. Two decades before, Claire had traveled back in time and into the arms of Jamie, a gallant eighteenth-century Scot. Then she returned to her own century to bear his child, believing him dead in the tragic battle of Culloden. Yet his memory has never lessened its hold on her. When Claire discovers that Jamie has survived, she is torn between returning to him and staying with their daughter in her own era.

The third season premiered on Starz September 10, with new episodes airing weekly into the fall.

“OUR SOULS AT NIGHT”

The Netflix adaptation of Ken Haruf’s novel, OUR SOULS AT NIGHT (Knopf/Vintage), reunites Oscar-winners Robert Redford and Jane Fonda for the fourth time. Addie (Fonda) and Louis (Redford), long-widowed, empty nesters, come to know each other better and discover a second chance at love in the small community of Holt, Colorado. The film, which has received positive reviews, is also enjoying a concurrent brief run in select theaters.

Aaron Mahnke’s THE WORLD OF LORE: Monstrous Creatures (Del Rey) is the basis for a new Amazon horror anthology. Spread across six episodes, the series explores the disturbing history behind a number of horror-tinged myths. In his book, Mahnke, the host of the hit podcast Lore, serves as a guide on a fascinating journey through the history of terrifying creatures. In a world of “emotional vampires” and “zombie malls,” the monsters of folklore have become both a part of our language and a part of our collective psyche. Of note, Mahnke invites readers to the desolate Pine Barrens of New Jersey, where the notorious winged, red-eyed Jersey Devil dwells.

“JOAN DIDION: The Center Will Not Hold”

Across more than fifty years of essays, novels, and criticism, Joan Didion has chronicled the changing tides of American culture and politics – often in deeply personal ways. This upcoming documentary, JOAN DIDION: The Center Will Not Hold, directed by Didion’s nephew Griffin Dunne, is primarily based on SOUTH AND WEST: From a Notebook (Knopf), in which Didion presents excerpts from two notebooks. In one, she traces a road trip she took with her late husband, John Gregory Dunne, in June 1970, through Louisiana, Mississippi, and Alabama. She interviews prominent local figures, describes motels, diners, a deserted reptile farm, a visit with Walker Percy, a ladies’ brunch at the Mississippi Broadcasters’ Convention. A different notebook, the “California Notes,” began as an assignment from Rolling Stone on the Patty Hearst trial of 1976. Though Didion never wrote the piece, watching the trial and being in San Francisco triggered thoughts about the city, its social hierarchy, the Hearsts, and her own upbringing in Sacramento. Dunne’s documentary, which debuts next month as part of the New York Film Festival, intersperses archival footage alongside his interviews with his Aunt Joan, delving into her extraordinary body of work and its impact on our cultural landscape. Of note: footage of Didion partying with Janis Joplin in a house full of L.A. rockers in the ‘60s; hanging out in a recording studio with Jim Morrison of The Doors; and cooking dinner for one of Charles Manson’s followers for a magazine story.

Debuts at The New York Film Festival, with screenings on October 11, 12 and 14; and then premieres on Netflix, October 27

On the heels of the success of Hulu’s The Handmaid’s Tale, based on Margaret Atwood’s novel of the same name and winner of six Emmy Awards, our author’s work is a hot property in Hollywood. Expectations are high for Alias Grace, an adaptation Atwood’s ALIAS GRACE: A Novel (Anchor). In the book, it is 1843, and Grace Marks has been convicted for her involvement in the vicious murders of her employer and his housekeeper and mistress. Some believe Grace is innocent; others think her evil or insane. Now serving a life sentence, Grace claims to have no memory of the murders. An up-and-coming expert in the burgeoning field of mental illness is engaged by a group of reformers and spiritualists who seek a pardon for Grace. He listens to her story while bringing her closer and closer to the day she cannot remember. What will he find in attempting to unlock her memories? Produced by Netflix and Canada’s CBC, the six-part series will tell the story of Marks and delves deeply into this twisty tale.

Based on ABC News reporter and author Martha Raddatz’s searing nonfiction book, THE LONG ROAD HOME: A Story of War and Family (Berkley), this National Geographic series recounts, across eight episodes, the harrowing story of The First Cavalry Division, which suffered a surprise attack on the streets of Sadr City, a district of Baghdad, on April 4, 2004. The series, like the book, will chronicle the events of the attack through the eyes of the soldiers who lived it.

Season two of Netflix’s critically acclaimed and Emmy Award-winning series, The Crown, is expected to wade into darker territory. There will be more emphasis on the complexities of Elizabeth’s (Claire Foy) marriage to Prince Philip (Matt Smith) while also delving into Philip’s backstory – one that is both extraordinary and tragic. THE CROWN: The Official Companion, Volume 1: Elizabeth II, Winston Churchill, and the Making of a Young Queen (1947-1955) (Crown Archetype) was written by the show’s historical consultant and royal biographer, Robert Lacey. The book is filled with beautifully reproduced archival photos and show stills, adding expert and in-depth detail to the events of the series, painting an intimate portrait of life inside Buckingham Palace and 10 Downing Street. A wonderful holiday gift for THE CROWN fan in your life.