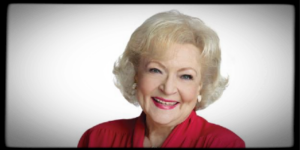 Betty White, award-winning actress, animal advocate, and bestselling Putnam/Berkley author, died on December 31, 2021 at the age of 99. Her passing sparked an immediate outpouring of personal tributes. On Instagram, former First Lady Michelle Obama shared a photo of Betty with former “first dog” Bo and the following message: “Betty White broke barriers, defied expectations, served her country, and pushed us all to laugh. She was also an animal lover and activist, and Bo loved spending time with her. There was no one quite like her, and Barack and I join so many who will miss the joy she brought to the world. I know our Bo is looking forward to seeing her up in heaven.”

The award-winning film and television actress appeared in such classic television series as The Mary Tyler Moore Show and The Golden Girls. In a career that spanned eight decades, she received seven Emmy awards, three American Comedy Awards, three Screen Actors Guild awards, and a Grammy. Both a pet enthusiast and animal health advocate, White was the president emerita of the Morris Animal Foundation and was a member of the board of directors of the Greater Los Angeles Zoo Association.

White wrote two books published by Penguin Random House imprints Putnam and Berkley: IF YOU ASK ME (And Of Course You Won’t) (Putnam HC, May 2011; Berkley PB, February 2012) and BETTY & FRIENDS: My Life at the Zoo (Putnam HC, November 2011; Berkley PB: September 2012).

“It was a true joy to publish these two books,” said Ivan Held, President, Putnam/Berkley/Dutton. “Betty White the author was much like Betty White the actress that we all love and have read about. She was super hard working (in writing and promoting), dedicated to making things work, completely reliable, and always (always) full of good humor!”

In IF YOU ASK ME, Betty White shared her thoughts on a range of topics, including: