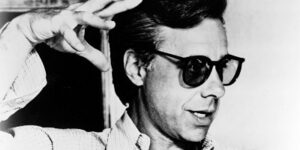 Peter Bogdanovich, award-winning Hollywood director and author of books for Knopf and Ballantine, died on Thursday, January 6, at his home in Los Angeles. He was 82.

The award-winning director of more than thirty acclaimed Hollywood films, Bogdanovich also wrote: WHO THE DEVIL MADE IT: Conversations With Legendary Film Directors (1997, Knopf HC; 2012, Ballantine Ebook); WHO THE HELL’S IN IT: Conversations With Hollywood’s Legendary Actors (2004, Knopf HC; 2005, Ballantine PB and Ebook); and PETER BOGDANOVICH’S MOVIE OF THE WEEK: 52 Classic Films for One Full Year (1999, Ballantine PB and Ebook). Another book, tentatively titled DIARIES: Becoming a Director, is scheduled for publication by Knopf in 2024.

Victoria Wilson, his editor at Knopf, said: “Peter Bogdanovich was a special man; a special talent. He was a man besotted early on with the great age of Hollywood and was responsible in so many ways of rediscovering the giants – directors and actors – of Hollywood’s most interesting age, beginning with its silent magical masterpieces, whether it was Buster Keaton, Chaplin, Raoul Walsh, and the others and then with Orson Welles, Howard Hawks, John Ford, Alan Dwan, Fritz Lang, Edgar Ulmer or Jerry Lewis. Peter was the original appreciator and he made sure the world rediscovered the work these men and women produced, first through Dan Talbot, in the 50’s and early 60’s and then with MoMA. Peter was deeply interested in their work, their vision, their quirks, how they worked and what made each an artist. He interviewed these people on a deep level, out of deep knowledge and respect, and got to know them.

“And Peter was an actor; he loved acting and understood actors. He studied with Stella Adler and soon he became a director, telling his own stories, informed with a rich understanding of what made a good story and how to tell it through film. And he was one of the great mimics of all time. There wasn’t anyone who did a better Orson Welles or Howard Hawks. Peter was at work on a series; working on several books and still in the process of making movies. We have lost a deeply informed and special artist and human being.”