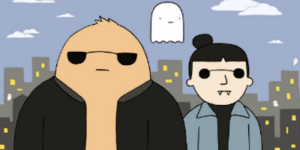 Reza Farazmand will be talking about his new graphic novel, CITY MONSTER (Plume), at a virtual event hosted by The Booksmith and The Bindery via Zoom on Thursday, November 19 at 9:00 pm (ET).

CITY MONSTER is set in a world of supernatural creatures and follows a young monster who moves to the city. As he struggles to figure out his future, his new life is interrupted by questions about his mysterious roommate—a ghost who can’t remember the past. Joined by their neighbor, a vampire named Kim, they explore the city, meeting a series of strange and spooky characters and looking for answers about life, memories, and where to get a good beer. With Farazmand’s signature style, this graphic novel is equal parts irreverent and insightful, the perfect vehicle for conveying the utter absurdity of our bizarre and confusing times.

Reza Farazmand lives and draws in Los Angeles. Best known for his comic series Poorly Drawn Lines, his work has been featured in and around such places as televisions, websites, magazines, and now this book. When he’s not writing or drawing, Reza enjoys drinking coffee and looking at things on screens.