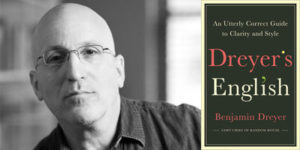 “Can a book about grammar be fun? Yes! Random House’s longtime copy chief offers friendly guidance on everything from when to use the dreaded ‘whom,’ to words you should dump immediately …” So begins a rave People Magazine Pick for DREYER’S ENGLISH: An Utterly Correct Guide to Clarity and Style by Benjamin Dreyer, published by Random House on January 29. Publishers Weekly bestowed a starred review, saying: “This work is that rare writing handbook that writers might actually want to read straight through, rather than simply consult.”

As the subject of this week’s “Meet Our Author” Igloo interview, Dreyer shares thoughtful insights into his book, writing, and copyediting career, while offering writing tips and grammatical guidance for us all.

What inspired you to write DREYER’S ENGLISH?

Back in the 1980s I’d written a small bit of short fiction and done a good bit of freelance writing, mostly on theater and films, and I thought I might like to make a go of it as a writer, but those aspirations fell by the wayside—I developed awful writer’s block, particularly insofar as writing fiction was concerned. But then I fell more or less accidentally into freelance proofreading and then copyediting, and happily I found true satisfaction that I was making a contribution to writing, even if I wasn’t writing myself, and I let the writing thing go.

About six years ago I found myself invited to copyedit a novel, and simply setting green pencil to paper again filled me with real joy; I’d forgotten how much I liked the work. And that sense of joy somehow rekindled my desire to write, and I decided that I’d like to write about what I know: copyediting. And before too long I was under contract to write this just-published book. It took a bit longer to write it than I thought it was going to, but that shouldn’t come as a surprise to anyone who works in publishing, I imagine.

How did you become such an expert grammarian and skilled copy editor?

My education in the English language was, I must confess, pretty rudimentary. I knew about subjects and predicates, and I could tell the difference between an adjective and an adverb, but beyond that I didn’t really know the names of things, or how language, technically, works. Once I started working as a proofreader—I certainly had the knack for finding typos, and that’s the better part of proofreading right there—I also had the opportunity to observe, in the manuscripts I was reading my typeset pages against, how copyediting works.

So I worked as a proofreader, observed copyediting, started reading stylebooks and learning about things like moods, and tenses, and subject-verb agreement, and eventually started copyediting myself. I don’t fancy myself an expert grammarian even now, but I know what works and what doesn’t work. And as to the rest of copyediting—keeping an eye open for authors’ overuse of pet words, and overstuffed sentences, and “and”s that should be “but”s or vice versa, and all the other magic tricks—I like to think that you just get better and better at that sort of work by doing it.

It’s also about being a good listener. You have to want to and be able to hear what an author is trying to do and help it along, not simply wander into a manuscript with a major sense of This Is Right and This Is Wrong and start hacking away.

What are the three most important points that you hope readers take away from your book?

The rest is commentary.