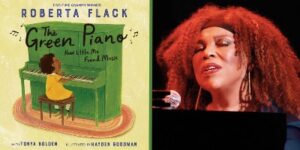 GRAMMY Award–winning singer Roberta Flack will release an autobiographical picture book with Anne Schwartz Books, an imprint of Random House Children’s Books, as announced by Anne Schwartz, Vice President & Publisher. In the story, Flack recounts her childhood growing up without many material possessions but surrounded by music and love. Her rise to stardom started with a beat-up piano that her father found in a junkyard, repaired, and painted green. Schwartz acquired North American rights from the Jennifer Lyons Literary Agency and will also edit the project. THE GREEN PIANO: How Little Me Found Music will be released on February 14, 2023.

Growing up in a Blue Ridge Mountain town, little Roberta didn’t have fancy clothes or expensive toys, but she did have music. And she dreamed of having her own piano. When her daddy spies an old, beat-up upright piano in a junkyard, he knows he can make his daughter’s dream come true. He brings it home, cleans and tunes it, and paints it a grassy green. And soon the little girl has an instrument to practice on and a new dream to reach for—one that will lead her directly down the road to fame.

“I have long dreamed of telling my story to children about that first green piano that my father got for me from the junkyard in the hope that they will be inspired to reach for their dreams” says Flack. “I want them to know that dreams can come true with persistence, encouragement from family and friends and most of all, belief in yourself.”

The personal and inspiring story, co-written with award-winning author Tonya Bolden, features rich, moving illustrations by Hayden Goodman and shares an intimate look at Roberta Flack’s family and her special connection to music. Its release coincides with the 50th anniversary of Roberta’s beloved classic song “Killing Me Softly with His Song” and includes fascinating back matter by Flack, with more about her childhood and where fame has led her.

Legendary singer Roberta Flack is known for her number one singles “The First Time Ever I Saw Your Face,” “Killing Me Softly with His Song,” “Feel Like Makin’ Love, “and “Where Is the Love” and “The Closer I Get to You,” two of her many duets with Donny Hathaway. She has received thirteen GRAMMY nominations, four of which she won, as well as a GRAMMY Lifetime Achievement Award.