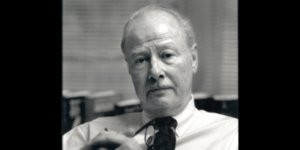 The life of Robert Loomis, the revered Random House editor for more than a half-century, whom we lost in April 2020 at 93, was celebrated on Sunday, September 5, at the Long Island Sag Harbor home he shared with his wife, Hilary, with an audience of friends and peers.

As Gina Centrello recalled in her staff-memo tribute to him, Loomis edited hundreds of Random House books, by such authors as William Styron, Edmund Morris, Neil Sheehan, Calvin Trillin, and thirty by Maya Angelou, beginning with “I Know Why The Caged Bird Sings.” He is one of the rare editors who had two books he published win National Book Awards the same year.

The speakers Hilary hosted included Robert A. Caro, Esther Newberg of ICM Partners, and Gayle Feldman, who is writing a biography of Bennett Cerf, which Loomis was editing, remembered him with eloquence and warmth. Knopf’s Jonathan Segal affectionately observed that “Bob and I were friendly rivals,” and recalled their frequent lunches at which “we talked about books and writers and editing.”

“Bob,” he said, “loved writers, loved being in their company. He had such respect for them. They gave him so much pleasure in life.”