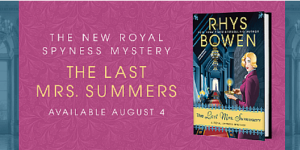 Rhys Bowen, author THE LAST MRS. SUMMERS (Berkley), will be discussing her latest Royal Spyness Mystery at a virtual event hosted by the Poisoned Pen bookstore via Facebook Live on Tuesday, August 4 at 9:00 pm (ET).

In THE LAST MRS. SUMMERS, Lady Georgiana Rannoch is just back from her honeymoon with dashing Darcy O’Mara when a friend in need pulls her into a twisted Gothic tale of betrayal, deception and, most definitely, murder.

Ms. Bowen, a New York Times bestselling author, has been nominated for every major award in mystery writing, including the Edgar®, and has won many, including both the Agatha and Anthony awards. She is the author of the Royal Spyness Mysteries, set in 1930s London, the Molly Murphy Mysteries, set in turn-of-the-century New York, and the Constable Evans Mysteries, set in Wales. She was born in England and now divides her time between Northern California and Arizona.