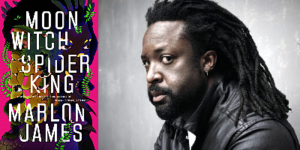 Booker Prize-winning author Marlon James sparked an online frenzy among readers, booksellers and the media last week when Riverhead Books revealed the February 15, 2022 release date for and cover art of MOON WITCH, SPIDER KING, the highly anticipated second installment of James’ Dark Star trilogy, his “African Game of Thrones. ” Among the reactions: “I literally jumped off my couch, no lie,” “I’ll be lining up after I recover from passing out when I saw this cover,” and “OMGGGGGG. HEART RATE ACCELERATING. I cannot wait.”

This announcement also quickly spawned ITS VERY OWN MEME—the ultimate test of iconic status. MOON WITCH, SPIDER KING is the highly anticipated follow-up to James’ New York Times bestselling Black Leopard, Red Wolf—which is being adapted for the screen by Michael B. Jordan—and depicts the same events told in Black Leopard, only this time told through the lens of Sologon, the Shadow Witch. Part adventure tale, part chronicle of an indomitable woman who bows to no man, it is a fascinating novel that explores power, personality, and the places where they overlap.

In an interview posted on GIZMODO, James shares how he came to use this “Rashomon technique” for MOON WITCH, SPIDER KING: “In several traditional African and diaspora stories, there is no authentic version, no director’s cut, no one truth to rule them all, which is very much a western thing to do, but also a reductive thing to do.

“Then there is this—in a lot of African folk tales, the trickster is the one telling you the story, or it’s about him, which ties you to his perspective, his world view, even his biases and prejudices. Sometimes you are told different versions of the same story each night. The burden of truth is not on the tale itself, but in what you discern truth to be. I’ve always been interested in how two people seeing the same thing can come to very different conclusions— I can walk into a room and see somebody gobbling a bag of chips and think he’s starving, while you’ll think he’s greedy. It’s also pretty topical of the moment we’re in—even though I didn’t set out to be—where people really do think truth is a choice, and that choice is up for grabs. So in that spirit, I will never tell the reader which character or story to believe. I’m leaving the burden of truth up to the reader, so it will be interesting when this trilogy is done, seeing whose story they count as true.”