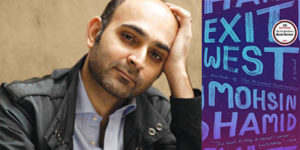 Mohsin Hamid’s EXIT WEST (Riverhead Books) has won the inaugural Aspen Words Literary Prize, a new $35,000 award given to “an influential work of fiction that illuminates a vital contemporary issue and demonstrates the transformative power of literature on thought and culture.” The four finalists included fellow Riverhead author Lesley Nneka Arimah for WHAT IT MEANS WHEN A MAN FALLS FROM THE SKY and Viking author Zinzi Clemmons for WHAT WE LOSE.

Riverhead Vice President, Editorial Director Rebecca Saletan accepted the award on Hamid’s behalf at the awards ceremony on Tuesday night at the Morgan Library in Manhattan. Afterwards, Saletan talked with NPR’s Linda Holmes about EXIT WEST. You can find out more about the ceremony and watch Mohsin Hamid’s recorded speech here. Among Hamid’s remarks: “I’m really grateful to be honored by this prize in particular, which is a prize that looks to books to have an impact on the world.”

In a conversation with NPR host Michel Martin during the evening, Arimah gave advice to new writers: “Be radically honest with yourself and with everyone else.”