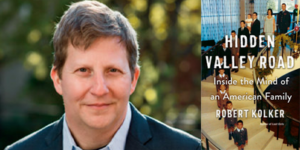 Robert Kolker, author of HIDDEN VALLEY ROAD (Doubleday), an Oprah’s Book Club pick, will be featured at a New York University virtual author talk, with an audience Q&A, via Zoom on Wednesday, May 6 at 7:00pm (ET).