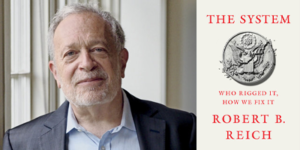 Robert Reich, author of THE SYSTEM (Knopf), will be the featured speaker in a Civics Series presentation followed by an online audience Q&A as part of a Town Hall Seattle virtual event on Wednesday, April 15, at 7:30pm (ET).

From the best-selling author of Saving Capitalism and The Common Good, THE SYSTEM is an urgent analysis of how the “rigged” systems of American politics and power operate, how this status quo came to be, and how average citizens can enact change. Reich’s objective is not to foster cynicism, but rather to demystify the system so that we might instill fundamental change and demand that democracy works for the majority once again.

Reich is Chancellor’s Professor of Public Policy at the Goldman School of Public Policy at the University of California, Berkeley. He has served in three national administrations and has written fifteen books, including The Work of Nations, which has been translated into twenty-two languages, and the best sellers The Common Good, Saving Capitalism, Supercapitalism, and Locked in the Cabinet. His articles have appeared in The New Yorker, The Atlantic, The New York Times, The Washington Post, and The Wall Street Journal, and he writes a weekly column for The Guardian and Newsweek. He is co-creator of the award-winning film Inequality for All, and the Netflix original Saving Capitalism, and co-founder of Inequality Media.