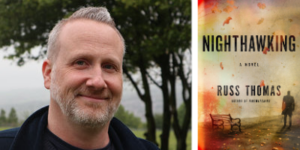 Russ Thomas, author of NIGHTHAWKING (Putnam), the second book in his DS Tyler series, will be in conversation with author Andrew Grant at a virtual event hosted by Poisoned Pen bookstore via Facebook Live on Tuesday, February 23 at 3:00 pm (ET).

You are a trespasser. You are a thief. You are a Nighthawker. In Thomas’s novel, NIGHTHAWKING, when a nighthawker on the hunt for antiquities instead uncovers the body of a foreign student, Detective Adam Tyler is pulled into a serpentine mystery of dangerous secrets, precious finds, and illegal dealings.

Russ Thomas grew up in the ‘80s reading anything he could get his hands on, writing stories, watching television, and playing videogames: in short, anything that avoided the Great Outdoors. After a few “proper” jobs, he discovered the joys of bookselling, where he could talk to people about books all day. Now a full-time writer, he also teaches creative writing classes and mentors new authors.