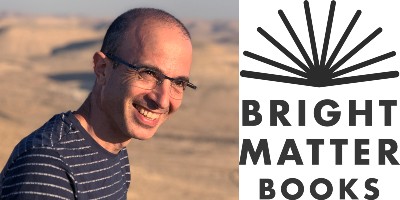 Prominent historian, philosopher, and author Yuval Noah Harari (Sapiens: A Brief History of Humankind) will publish a new illustrated middle-grade book, UNSTOPPABLE US: How Humans Took Over the World, this Fall, it was announced globally today by Penguin Random House children’s groups in the U.S., U.K., Canada and Australia.

Yuval Noah Harari brings his talents to the page for young readers for the very first time to share how humans eventually came to dominate Earth. And how—through triumph and growth, but also relentless, destructive voracity—humans became truly unstoppable. From learning to make fire and using the stars as guides to inventing stories and cooperating in huge numbers, the secrets of how our ancestors evolved millions of years ago will be uncovered, revealing the superpowers that brought us to “now,” and how they were used to make humans invincible . . . but also insatiable.

UNSTOPPABLE US is packed with full-color illustrations by Ricard Zaplana Ruiz that bring to life Harari’s dynamic, unputdownable writing.

Said Harari: “Unstoppable Us is the book that I wanted to read as a kid. It tells the history of humans since the time we were just apes living in the savannah, until the time we almost became god-like by flying in airplanes and spaceships. It’s a fun book—I hope young readers won’t want to put it down—and it’s also dead serious, aiming to preoccupy you with the questions it raises, . Every question from why we have nightmares and why we like sugar to why people believe in gods and why there are so many wars. Unstoppable Us has one key message for kids: The world in which we live didn’t have to be the way it is. People made it what it is. And people can change it.”

“We are honored to be the US publishing home for Yuval Noah Harari’s first children’s book and to introduce young readers to an extraordinary work about the origins of our being, in a way that only Harari can do so brilliantly—with great depth and humor,” says Barbara Marcus, President & Publisher, Random House Children’s Books. “It is truly a privilege to bring Yuval’s insights to the page for today’s young readers, and offer an opportunity for families, educators, and children to learn together from one of the greatest intellectual leaders of our day.”