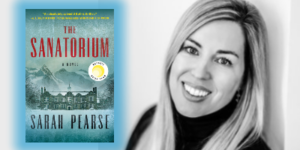 Reese Witherspoon has selected THE SANATORIUM by Sarah Pearse, published by Pamela Dorman Books, as Reese’s Book Club February pick. Witherspoon raved on Instragram: “Want to hear something scary? This month’s @ReesesBookClub pick is CHILLING! The Sanatorium by @sarahpearseauthor is an eerie, atmospheric novel that had me completely on the edge of my seat. Let’s set the mood…. You’re in a remote location—at a hotel—and there’s a snowstorm. The winds are howling, the snow is pelting in every direction, there’s a missing person, and a dead body shows up….! For all the unforeseen twists and turn, pick up a copy of this who-done-it and follow along at #reesesbookclub!”

From a starred Booklist review: “Pearse not only creates believably fallible characters, she also vividly portrays the frigid landscape of Le Sommet buffeted by blizzards, and a chilling epilogue cries out for a sequel. Crime-fiction readers will want to keep an eye on Pearse.”

Publishers Weekly enthused: “Pearse’s engrossing debut boasts a highly atmospheric setting . . . Readers will applaud as Elin, for all her anxieties, emerges as a competent sleuth. This dark tale of family dynamics is sure to please suspense fans.”

Pearse will participate in a PRH radio satellite tour on Tuesday, February 9.

Sarah Pearse grew up in Devon, UK, and studied English literature and creative writing at the University of Warwick before completing a postgraduate diploma in broadcast journalism. She lived in Switzerland for several years before returning to the UK. THE SANATORIUM is her first novel.