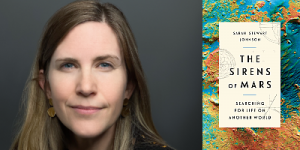 Sarah Stewart Johnson, author of THE SIRENS OF MARS: The Search for Life on Another Planet (Crown), has won the 2021 Whiting Foundation Award for Nonfiction. The ten winners of the 36th Whiting Awards, each of which comes with a $50,000 prize, were announced on April 14 in a virtual ceremony. The event featured a keynote by former U.S. Poet Laureate Tracy K. Smith, who won a Whiting in 2005, and readings by each of the winners.

Congratulations to Ms. Johnson, her editor, Amanda Cook, and everyone at Crown.

The Whiting Awards, established in 1985, are given annually to writers of drama, fiction, nonfiction, and poetry “to recognize excellence and promise in a spectrum of emerging talent, giving most winners their first chance to devote themselves full-time to their own writing, or to take bold new risks in their work.”

Philanthropist, technologist, business leader, and Penguin Random House author Bill Gates shares his list of thought-provoking books for summer reading on his blog, GatesNotes. In a…